(UNIONDALE, N.Y. – Aug. 17, 2022) PSEG Long Island crews mobilized last month in Bayville to help give a 6-week-old osprey fledgling a new chance at life after it fell from its nest atop an elevated platform.

The 2-pound fledgling was found on the ground near the pole on West Harbor Street near West Harbor Beach Memorial Park on Friday, July 15. Residents contacted Jim Jones of the Bayville Environmental Conservation Committee, and he organized a team to rescue the bird.

The young raptor turned out to be uninjured, but it was clearly not ready to be away from its nest. To resolve the challenge, Jones contacted PSEG Long Island, with whom he had worked to install the nesting platform atop the pole in 2019.

After getting permission from the State Department of Environmental Conservation, PSEG Long Island drove out to the platform with a bucket truck and carefully lifted the fledgling back into the nest the very same day.

The reunion was successful, and the adult ospreys have continued to feed the young bird until it is ready to hunt on its own.

“To us, environmental stewardship is part of our mission to be a strong presence in our communities,” said Michael Sullivan, PSEG Long Island’s vice president of Transmission and Distribution. “Building nesting platforms to keep the osprey safe from electrocution also improves reliability for our customers. And maintaining strong partnerships with local groups like the Bayville Environmental Conservation Committee allows us to provide vital support during events such as this one. We look forward to seeing these osprey for many years to come.”

“I can hear his screaming whistles whenever I bike by the nest. He is flying well now and will soon be trying to catch his own fish – finally,” said Jones. “My thanks to PSEG Long Island for their partnership in this rescue. When a chick is separated from its parents, time is of the essence, and we were able to reunite them in a matter of hours.”

In balancing its commitment to the consistent, safe delivery of power for its customers with its commitment to being a good environmental steward, PSEG Long Island has installed dozens of new osprey nesting platforms to deter the returning birds from nesting on electrical equipment, which puts both the raptors and the electrical system in danger. Maintaining the nesting platforms helps PSEG Long Island maintain strong electric service reliability.

PSEG Long Island has installed 24-hour webcams at two of these nesting platforms, in Oyster Bay and Patchogue. For more information about osprey and to view live webcam feed of the nests, visit https://www.psegliny.com/wildlife/ospreycam. 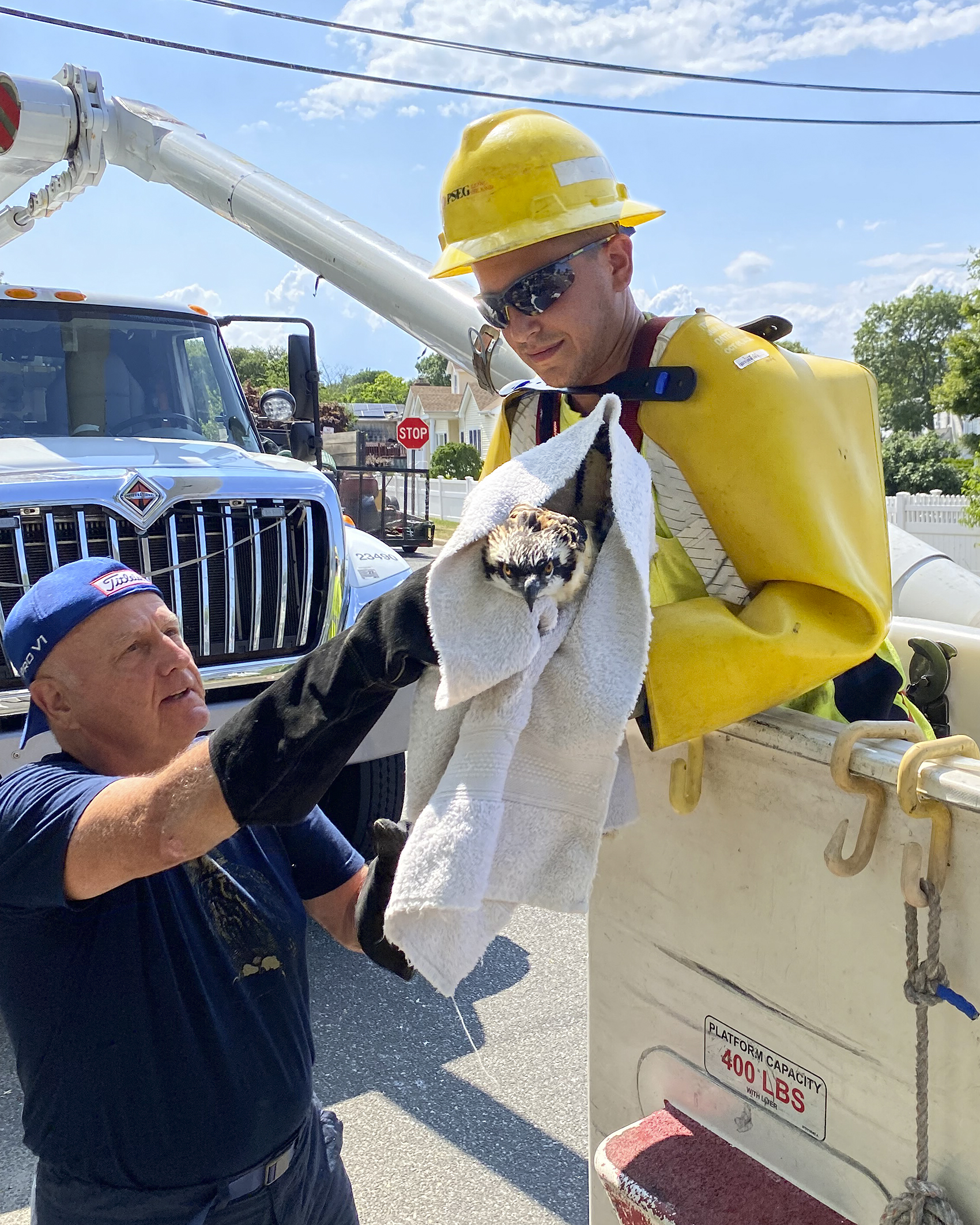 Photo Caption: PSEG Long Island Line Worker Alec Frank takes a 6-week-old fledgling osprey from local wildlife expert Jim Jones and wraps it in a blanket before safely delivering it back to its nest in Bayville.