The 20 PSEG Long Island volunteers and the group from Island Harvest placed 1,805 packs end-to-end on pallets throughout Island Harvest’s Hauppauge collection and distribution center. When all the packs were placed, they measured 1,164 feet in length snaking around the warehouse.

To make the attempt eligible for the world record, the packs had to touch each other, and once the bag was placed, it could not be touched or picked up. The entire attempt had to be videotaped and a judge was on hand for the entire three hours. Next month, Guinness will announce whether this attempt successfully beat the existing record of 1,000 packs.

“I am so proud of our partnership with Island Harvest, and our employee-volunteers who help this organization pack food in its warehouses throughout the year,” said Daniel Eichhorn, president and COO, PSEG Long Island and Island Harvest board member. “We are hopeful that this attempt to break the record will be deemed a success. Either way, the people of Long Island win because of the vital services Island Harvest provides to Long Islanders every day.”

“Thanks to our friends at PSEG Long Island, we not only likely broke a world record, but we were able to highlight the issue of childhood hunger on Long Island,” said Randi Shubin Dresner, president and CEO, Island Harvest Food Bank. “Nassau and Suffolk counties are home to some of the wealthiest ZIP codes in the country, and there is simply no reason for any child here on Long Island, or across the U.S., should go without something as basic as food.”

The food packs used in the Guinness attempt were distributed through Island Harvest Food Bank’s Kids Weekend Backpack Feeding Program, which provides supplemental food support for schoolchildren who rely on their school’s breakfast and lunch programs, but often don’t have enough to eat over the weekend.

PSEG Long Island is committed to giving back to the people and communities it serves by actively supporting hundreds of local charity events each year through the company’s Community Partnership Program. Last year, PSEG Long Island employees logged more than 26,000 service hours volunteering at 1,145 fundraising and community events to support more than 400 organizations. For more information on how PSEG Long Island supports the communities it serves, visit https://www.psegliny.com/inthecommunity/communitypartnership. 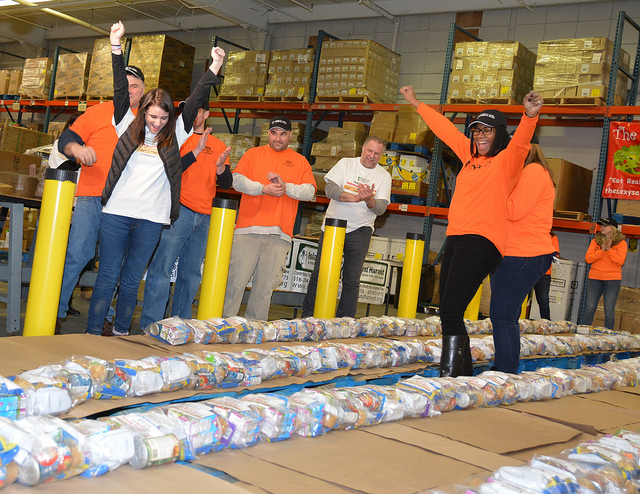