(UNIONDALE, N.Y. – April 1, 2020) PSEG Long Island has installed two webcams to offer a sneak peek into the lives of the local osprey.

Employees work throughout the year to balance PSEG Long Island’s commitment to deliver consistent, safe delivery of power for its customers with its commitment to being a good environmental steward. Providing a safe nesting area for the osprey away from vital electrical infrastructure helps PSEG Long Island maintain strong electric service reliability. Ospreys often use utility poles and transmission structures for nesting, which jeopardizes system reliability, causes outages and damages equipment.

“The osprey have made a triumphant comeback here since the 1970s, and PSEG Long Island works to make sure that they can continue to flourish,” said Dan Eichhorn, president and COO of PSEG Long Island. “Especially now, with so many of us remaining inside our homes for the sake of public health, these webcams offer a much-needed front-row seat to the comings and goings of these majestic birds. We are proud of the dedication of our employees who made this happen, and how much they truly care about our customers and our communities.”

PSEG Long Island has installed 24-hour webcams at two of the nests that were safely relocated by line workers during the time of year when the birds are not raising young. The first is showing a live feed of a nest in Oyster Bay; a second webcam has gone live from a nest in Patchogue. At the Oyster Bay location, the osprey pair returned late last month, just in time for our camera to get some great photos! Visit www.psegliny.com/wildlife/ospreycam to access the video feeds.

Since the resurgence of the osprey population, PSEG Long Island and its dedicated team, with the guidance and support from environmental partners, have identified best practices for when to move a nest, and when to create alternative safer nest locations for the ospreys. PSEG Long Island workers have safely relocated two dozen osprey nests in order to ensure the birds are out of harm’s way from high voltage systems, and taken actions to make nests safe in place at an additional eight locations. Nesting on electrical equipment puts the ospreys at high risk of electrocution, as their large wingspan can complete the circuit between closely spaced energized equipment or between an energized wire and a neutral ground wire. 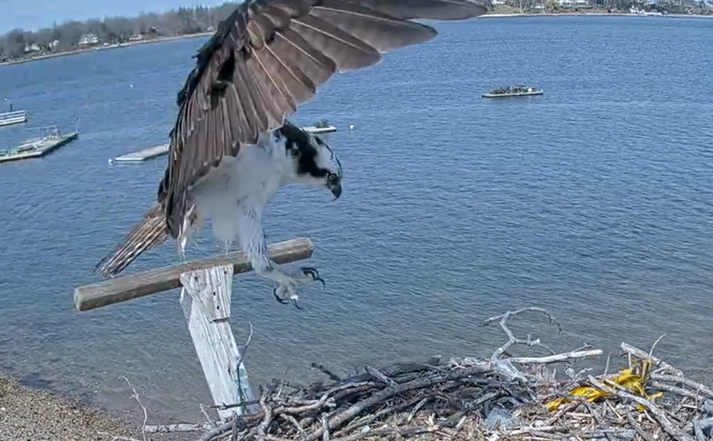 Photo Caption: An osprey lands in its nest atop a pole in Oyster Bay. PSEG Long Island, which relocates osprey nests to protect the birds from electric shocks, has set up webcams so the public can enjoy the birds' comings and goings.