(Uniondale, NY – June 18, 2019) – Suffolk County Electrical Contractors Association (SCECA) has named longtime PSEG Long Island employee Rich Inserra its 2019 “Man of the Year.” Inserra, a Patchogue resident, was given his award at a May 31 SCECA dinner in his honor.

Inserra was honored as “Man of the Year” for his dedication to excellent customer service, and for serving as a dependable and trustworthy liaison to SCECA for many years. A principal engineer for distribution engineering and resources at PSEG Long Island, Inserra began liaising with SCECA in 2005, making him one of the longest serving advisors to the SCECA board of directors. The pillars of SCECA mirror those of PSEG Long Island: safety, reliability, quality control, integrity and progress.

“Rich is part of a PSEG Long Island team that provides trusted advice to the board and all of the association’s members,” said Joe Mikulas, SCECA board member/former SCECA board president. “Sometimes that means explaining what certain regulations mean in practical terms. Sometimes it means bringing the real world concerns of contractors back to management at PSEG Long Island so a solution can be developed. Rich gets answers to questions our membership asks.”

Inserra says his approach as an advisor is centered on empathy.

“I listen to their questions and concerns, and try to put myself in their place so I can better appreciate where they are coming from,” said Inserra of the connections he makes with the contractors. “I don’t expect them to be experts in reading and interpreting our rules for connecting to the electric system; that’s where I can help.”

He adds, “It feels pretty good being recognized by this group of hard-working people.”

“We are very proud of the work Rich is doing with SCECA as a vital connection between contractors and PSEG Long Island,” said John O’Connell, vice president of transmission and distribution for PSEG Long Island. “Rich’s dedication, good nature, experience and customer focus have made him a highly respected leader in his field. It’s no surprise SCECA has named him ‘Man of the Year.’” 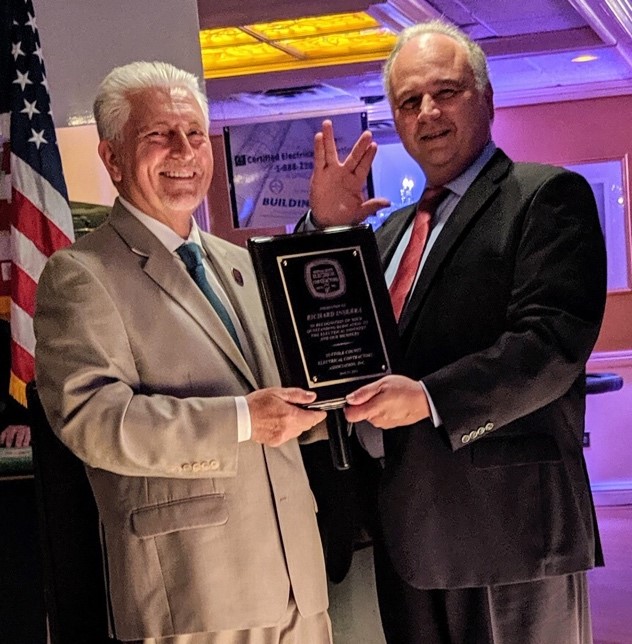 Photo Caption: PSEG Long Island Employee Rich Inserra (right) of Patchogue receives “Man of the Year” award from Dave Kennedy, president of the Suffolk County Electrical Contractors Association, at a celebratory dinner hosted by the organization in his honor.